As we celebrate Friends history — and future — in this anniversary year, please show your support by becoming a member or renewing your membership.

Watch for more Friends of Cary Memorial Library news and updates throughout the year.

Take a walk down memory lane with Friends of Cary Memorial Library!

Under the leadership of Ione Garing and Nancy Winsten, the Friends of Cary Library is founded by a group of supporters, committed to sustaining and developing the library’s resources and services. 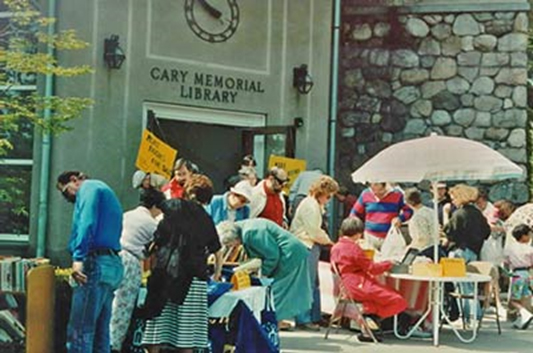 The 2nd Annual Book Sale is held at the library on Discovery Day, May 25.

A Play Reading Group forms and meets every other Monday evening at a group member’s home.

Friends of Cary donates a new security system to enhance access to videos and compact disks.

“Share an evening of poetry” is listed among Spring Calendar dates! 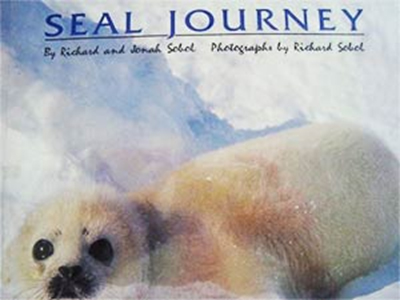 Spring and Fall Lexington Authors Evenings continue. Among the speakers are Richard Sobol and son Jonah, who create Seal Journey, following their trip to Canada’s Gulf of St. Lawrence.

Income from donated book sales, from July 1994 to July 1995, totals $15,165 and continues to enhance library services, including the museum pass program.

Friends reports the purchase of a sound system for the library, in its Spring newsletter.

Friends co-sponsors Aimons Lire, a Franco-American reading club in Lexington, with Boston Accueil and French Cultural Center. The club alternately reads and discusses the books in the language of the book editions. 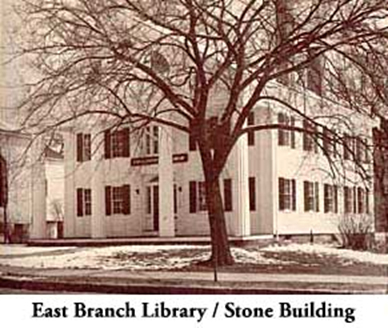 As library advocates, Cary Friends representatives attend the annual Massachusetts Federation of Libraries meeting and hear about priorities and activities of other attendees.

1,383 Lexington children and their families participate in this year’s summer reading program, “CELEBRATE! READ!,” at the main and East Branch libraries, reading 20,812 hours.

Library renovation is on the horizon! During the Friends annual meeting, Lexington historian and speaker Larry Whipple spotlights the town’s early libraries, including adult member-based Social and Farmers’ libraries and a free Juvenile library, established by town vote in 1827. Bill Dailey, board chair of newly formed Cary Memorial Library Foundation, outlines the Foundation purpose and the upcoming capital building plans.

For the first time, Friends of Cary and Lexington Historical Society co-sponsor a lecture, given by Dr. Thomas O’Connor, author of numerous books on Boston history. The event takes place in   the Dining Room of Hancock Church. 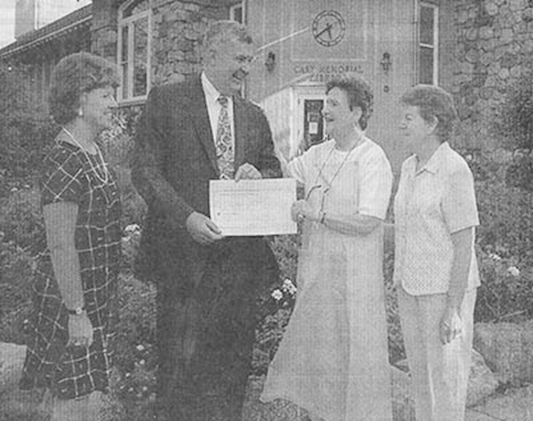 As published in the Lexington Minuteman on August 17, 2000. [Staff photo by Lawrence Pruyne]
Isabel L. Jankelson (second from right), president of The Friends of Cary Memorial Library Inc., turns a $15,000 pledge payment over to William J. Dailey, president of the Cary Memorial Library Foundation. To date, The Friends have made donations totaling $87,000 towards their $100,000 pledge for the library’s renovation project. Also present for the check passing was Carol A. Mahoney, library director (left) and Mary Aybazian, treasurer of The Friends. In acknowledgement of this gift, the Foundation will name the conference and lecture hall in the renovated building for The Friends.

The library closes for renovation in November. 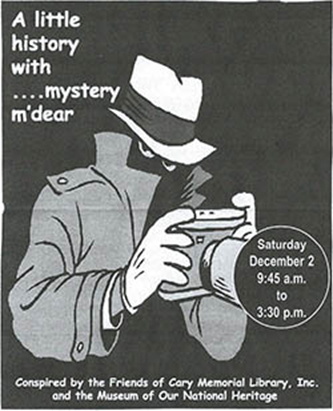 Mystery writer workshops take place in December at the Museum of National Heritage.

Friends of Cary continues to fund passes to 14 area museums. The Science Museum, Discovery Museum, and Aquarium receive highest use, with passes averaging 19, 16, and 15 times each month, in recent months.

For the second year, the annual meeting takes place at the Church of Our Redeemer—as it would the next year!

In February, Friends of Cary and the National Heritage Museum hold a joint Great Train Film Festival for young children on three mornings and adults during three evenings. Despite cold, snowy mornings, parents, grandparents, and nannies especially turn out with little ones to enjoy “Thomas the Tank Engine,” “John Henry,” and “The Little Engine That Could.”

Cary Library re-opens on a bright, sunny April day, with Friends volunteers on hand to greet each library visitor.

Authors Evening Series and Book Sales planning gets underway!  When the Author Evening Series resume in the fall, bestseller novelist, Dennis Lehane, is among the featured speakers!

Monday Evenings of Music in March feature Colonial Brass, part of the Band of Liberty, stationed at Hanscom Air Force Base. Next up, Jeff Leonard, Lexington High School music teacher and student musicians, who present “DeMystifying Jazz: What is it all about.”

Friends of Cary and the Lexington Reads Committee co-host a Film/Discussion Series. Among the entries are “Joy Luck Club” and “House of Sand and Fog. Based on series popularity, the partners sponsor a 2007 series, this one ranging from “Asphalt Jungle” to the comedy, “Talk of the Town.”

Mystery writers and community members gather at the Depot for a Sleuth Soiree, a first-ever Friends gala fund-raiser. Guests and writers enjoy mingling with the writers, who share thoughts about their books and mystery writing. 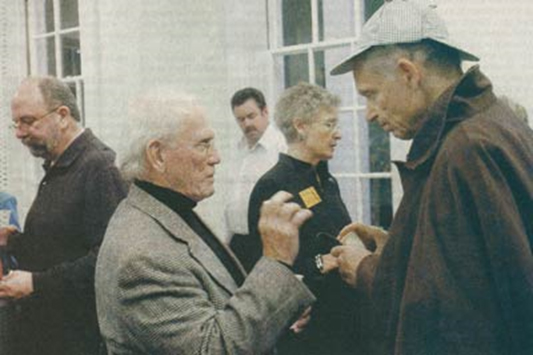 As published in the Lexington Minuteman on November 1, 2007. [Staff photo by Holly Schmidt]
Hal Lord, left, and Stu Taylor, both of Lexington, enjoy the Sleuth Soiree on Friday night at the Depot Building. 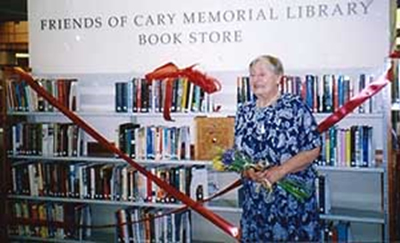 On June 12, Friends of Cary Memorial Library Book Store opens, a gift of Peggy Barton, in honor of past President Betty Clark. 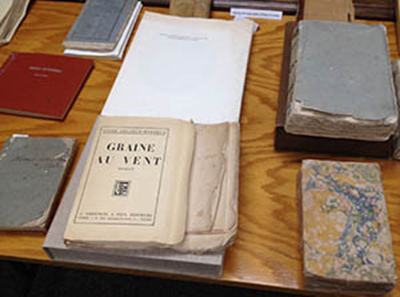 Friends of Cary encourages the community to bring old books, historical newspapers or magazines to a talk titled “Is There Value in Your Old and Rare Books.”  Guest speaker is Kenneth Gloss, proprietor of  Boston’s Brattle Book Shop and frequent Antique Road Show contributor.

At its annual meeting, Friends celebrates a 20th anniversary, showcasing its accomplishments with photos and stories! 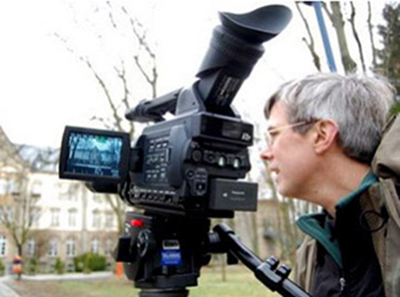 Friends of Cary bids farewell to Library Director Connie Rawson and welcomes Koren Stembridge as new director. In a move to Go Green, Friends members are encouraged to receive newsletters by email.

Popular music fans flock to Dr. Steve Berrien’s Rock and Roll and American Society: From the Roots of Rock and Roll to the British Invasion. The Friends-hosted weekly series runs from late fall through early winter.

Cary Library designates 2014 as its “Year of Discovery: Science, Technology and You.” In partnership, Friends of Cary hosts spring and fall speakers programs and co-sponsors the Childrens Summer Reading Program—all focusing on science and technology.